This book written by Lewis Carroll is probably one of the most remarkable books in the last 200 years. It is discussed by quantum physicists, psychologists, and artists who keep reinterpreting the book, never failing to dig up new and surprising details. We approached this charged “missile” with great caution, especially considering that we have no experience in stage design. Anyway, what is architecture if not a stage in a way.

The book has several important transformations which are difficult to describe with words. To portray them with the help of cinematography, with all its special effects and technologies, is possible, but it is even more complicated. But putting in on a static stage without mechanical devices was extremely challenging.

The actors used and interpreted almost every corner of the stage in various scenes. This helped to organize movement from the proscenium upstage. There is a constant change of scales and characters that reflect the remarkable “Carrollian” transformations. 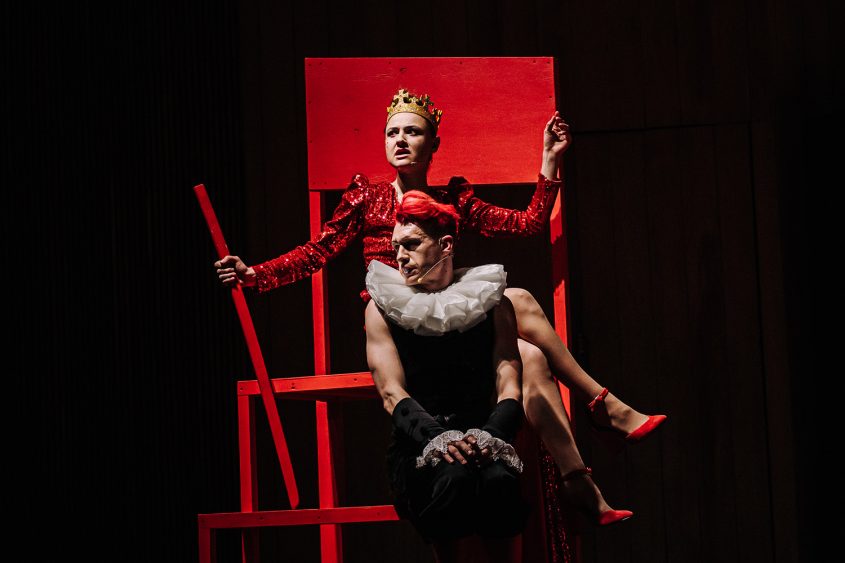 We used a combination of three elements: Italian theatrical tradition of the Late Renaissance with its enhanced perspective, the inverted perspective of Byzantine icons, and a bit of Constructivism. As a result, we have a surprising mix of contradictory scales and viewpoints that coexist at the same time and place. The atmosphere of a bar or a cafe in the background which is rather common for most city dwellers adds a bit of humdrum to the viscous and constantly changing space.

The sets were made in one go, and the whole theatrical performance quickly adapted to them.