“It is extremely important to consider it as a comprehensive ecosystem”

In his interview for NewsRoom website, Oleg Drozdov speaks in detail about our Green Corridor project – in particular about how this project should be implemented, what can be attractive about it for investors, and why it’s so important to attract the attention of local citizens.

On the process of implementation

On the one hand, there’s no time to waste, but on the other hand, the project implementation should be preceded by a thorough research. First of all, green corridors that should become part of the entire urban ecosystem. It means that small streams and rivers that flow into the main rivers of the city need studying and cleaning, which involves a great deal of effort on the part of biologists, environmental scientists, etc.

One have to understand that the transformed riverfront territories are going to attract a lot of people. At the same time, a river is a space that accumulates numerous plants and animals. Therefore, it is extremely important to consider it as a comprehensive ecosystem and provide an opportunity for peaceful co-existence of human beings, flora, and fauna. For example, there are abandoned areas that haven’t been trodden by anybody for quite a long period of time. Being spared in this way, the nature in these places has had a chance for renovation. So, one has to be extremely careful while working with such areas. One has to ask a lot of questions, e.g. what should be done to protect the river banks, what kind of pedestrian paths should be made there, and how to make sure that the new infrastructure won’t damage the existing ecosystem? Besides, there should be legal documents that would stipulate everything related to the Green corridor. One will have to deal with legislative bodies who will be in charge of transforming all the conceptual proposals and research results into local statutes and development rules.

One thing can be said with certainty. The project is not about merely making paths along the river. It is a lasting program with a certain a final goal.

On the timeline of implementation

The project can be implemented gradually rather than in one go. It’s important to attract the citizens’ attention so that they become accustomed to the idea that these areas are part of public urban space. On the first stage of the project, it can be merely about creating gravel footpaths, cleaning the areas from rubbish, and introducing footbridges across the river where they are needed. At the same time, it is necessary to negotiate with the industrial enterprises that have their facades facing the river and come to some agreement on the boundary between the Green corridor and the neighboring properties.

On attracting potential investors to the project

When the city finally ‘turns its face’ to our rivers, the high quality public space that will appear will surely give rise to new cultural institutions, medium-rise development, new cafes, shops, etc.This is what can possibly attract investors.

On the role of citizens

What makes a project really sustainable and guarantees its long and successful lifetime is the fact that it totally satisfies all the requirements and expectations. This can be only achieved through collaboration where citizens play a major role. The latter can take form of a serious discussion or volunteer clean-up events where people can take active part. Citizens can become real stakeholders and full participants of this large-scale process.

It turned out that a similar project, which is worth public attention, is now being developed by the experts from the NGO “Another way” (“Інший шлях”). We are eager to join our efforts. In fact, good and sustainable ideas are right in front of our eyes, although they never occurred to those who created a straight stone-clad embankment in Kharkiv, which looks more like that in Saint-Petersburg. There are different interpretations of such corridors. We are not the first, and we are not alone.

One doesn’t have to make thorough analysis to understand that Kharkiv has acquired rather substantial financial resources lately. It seems to me that part of these resources should be spent on research in order to understand what the city needs. The truth is that we know nothing about the city. We don’t understand how it develops, what kind of values it declares, how it achieves them, and in what way the city wants to reach that proverbial “bright new world”. For the time being, what we have is continuous “patching works”. I for one believe that more serious and ambitious projects cannot be realized without long-term planning and more serious goal-setting.

Read the full version of the interview on Newsroom website. 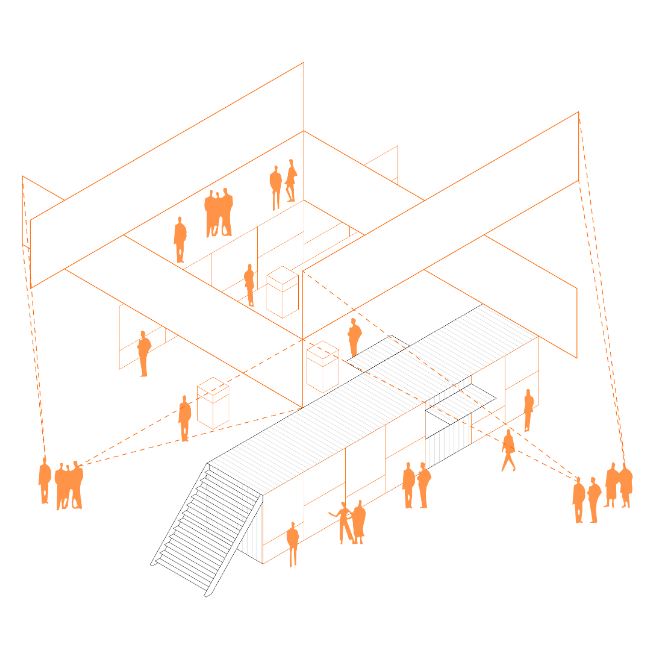 The Return of the Prefabrication An important step towards the implementation What to do with pigeons and when the theater turns green
We use cookies to best present our site. If you continue to use the site, we will assume that this suits you.Ok